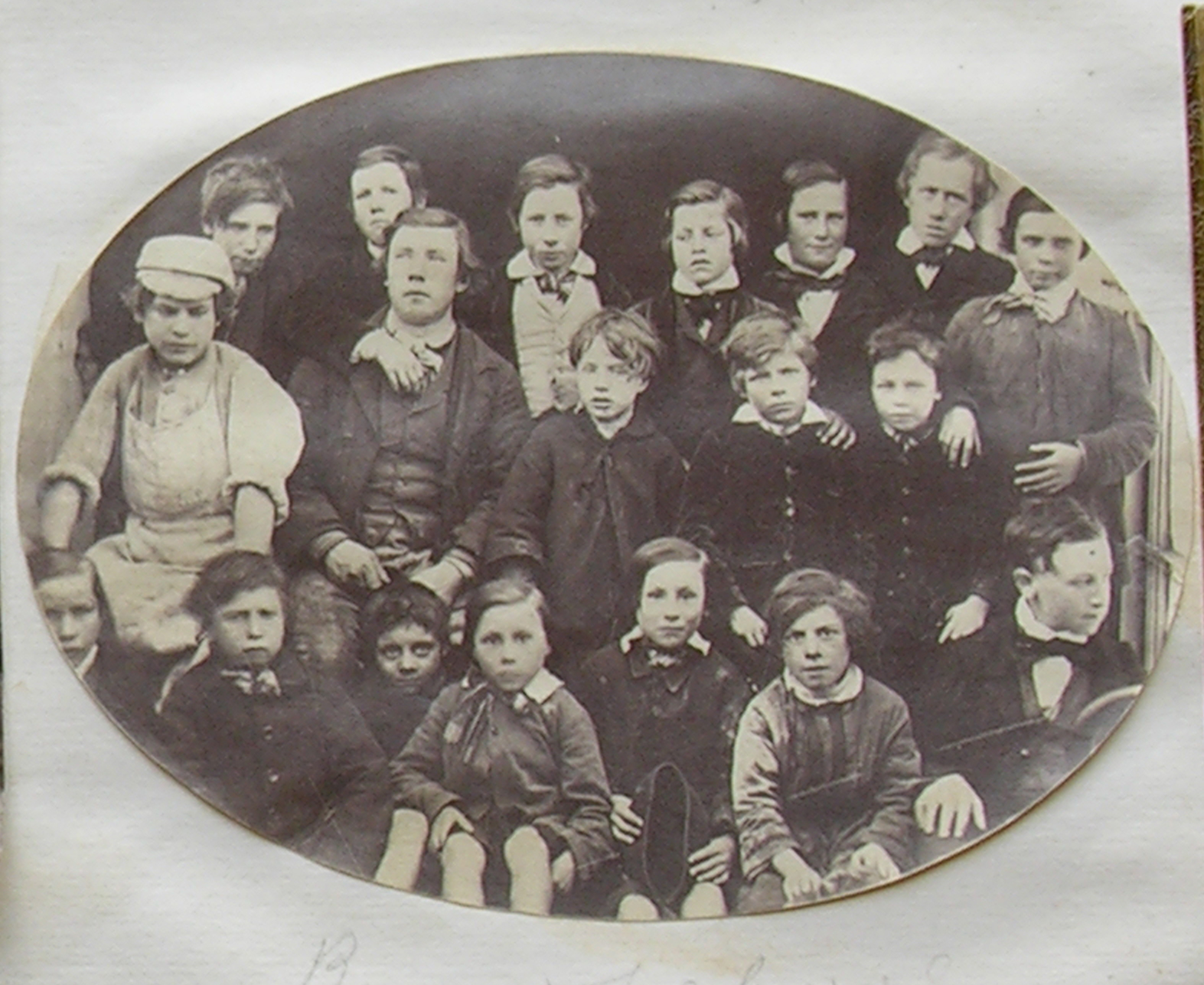 Two articles on 'Foot-ball' matches played in 1870 and 1872 when the Tain Ragged School and Inverness Reformatory School competed for a Silver Cup donated by Mr Snowie.

A fete of an unusual and interesting character took place here yesterday. Some time ago Mr. Thomas Beales Snowie, son of Mr. Hugh Snowie, Gunmaker-of worldwide reputation as the great northern authority on all matters of sport-intimated to the boys of the Tain Ragged School that he was to offer a silver cup as a prize to be competed for at a foot-ball match between them and the boys of the Inverness Reformatory School. The challenge was accepted, and Mr. Snowie in the liberal and handsome manner paid the railway fare for the children from Tain and back again. As a good many girls are also associated with the school at Tain, Mr. Snowie invited them also. The whole school, 55 boys, and 30 girls along with their principal teachers and Mr. Smith, bookseller, Tain, who has been the life and soul of the school from its commencement thirteen years ago, arrived here yesterday by the first train from the North, and were met by their hospitable entertainer at the station. The boys of the Inverness school were also present, under Mr. Grant, the Superintendent, and they were all photographed in a group by Mr. White of Inverness.

Having been formed into a procession, the children marched through the town to the Longman, preceded by the band of the Inverness Reformatory, about 20 strong. On arriving at the most suitable part of the greensward by the seashore, the boys prepared for the foot-ball match, 30 on each side, and soon the game was entered into with rare zeal. The victory rested ultimately with Inverness. Other games were also indulged in, races &c.in which generally the Inverness boys came off victorious, but they were well-matched, and the games were not won without severe effort on both sides. It is some excuse for the Tain lads, especially in the football match, that their competitors knew the ground thoroughly, having frequently practiced at the Longman, and having been especially assiduous since it was known that this match was to come off.

About two o’clock in the afternoon, they marched, with colours flying, and the band playing, through the town to the Music Hall. There a most abundant repast was prepared for the children from Tain and their instructors; roasted joints, pies, puddings, creams, desserts.  A number of the councillors of Inverness were present on the platform, including Bailie Simpson in the chair, supported by Mssrs Macgregor, Sutherland, Ballantyne, and McKean; Mr. Dallas Town Clerk; Councillors MacBean and P Baillie; Mr. Innes, Solicitor; Mr. D Fraser, Solicitor; Mr. Jones of the Highland Railway; Mr. Duff, Banker; Mr. R Mackay, Hamilton Place; Mr. Galloway &C. A large number of the young ladies were also present, who most kindly waited upon the children, and saw to all their wants and needs. Three long tables were occupied by the guests in the centre of the hall, Mr. T B Snowie presiding at the centre table, and at the end of the room was the band of the Inverness Reformatory, who played from time to time, relieved by an excellent young piper to No5 Company of Volunteers. The Inverness boys received an equally sumptuous repast at their own school, it having been deemed expedient that they should not dine together; 74 of these shared Mr. Snowie’s hospitality, so that his guests altogether numbered 159, besides the masters and other friends.

After dinner, Bailie Simpson presented the cup, valued at £5 by Mr. P G Wilson, who furnished it, to Mr. Grant as superintendent of the Inverness Reformatory School, and intimated that it would be competed for next year at Tain when the winners would be allowed to retain it. Bailie Simpson presented to the Tain boys a first-class foot-ball, also the gift of Mr. T B Snowie, with which they will have an opportunity of practicing for the competition next year.

Mr. Grant returned thanks and mentioned that this was, by no means, the first occasion on which the Reformatory School was indebted to the generosity of Mr. T B Snowie. For the last two years, he had given the boys a feast day and had encouraged foot-ball playing among them so that old pupils were inclined to come back occasionally and have a game with him and the lads. (Cheers.) Since this was begun he had noticed a marked improvement in the conduct of the boys under his charge. Mr. Smith of Tain also expressed the pleasure he had in seeing so many friends around him. If he had been the means of giving them a pleasant holiday, he was amply rewarded. (Loud cheers.) Education was a foremost topic at the present time-the Government appears to be sincerely desirous of promoting it; and he hoped that he might live to see the day when every man, woman, and child in this country would be so far educated as to be at least able to read, write, and reckon-

“Tis education forms the common mind;
Just as the twig is bent, the trees inclined”

He hoped that the education the children were now receiving would induce them in years after to help forward the cause by promoting it among others. (Prolonged cheering) Mr. Dallas, Town Clerk; Mr. MacCulloch of the Reformatory School; the Rev Mr. Ballantyne, Mr. Charles Innes, and others briefly addressed the meeting.  The Rev, Mr. Sutherland proposed a special vote of thanks to Mr. T B Snowie for his extreme liberality. It gave him, he said, a heartfelt pleasure to be present on an occasion so interesting and auspicious. He was highly gratified to hear the Tain boys had done so well, for he had spent his schoolboy days in the Academy there, and should have felt a kind of patriotic enthusiasm when he learned of their success. He was sure Mr. Snowie would reward in seeing so many happy faces at this social meeting, which was quite a novel thing; the young people would never forget it or Mr. Snowie.

The vote of thanks was most enthusiastically responded to. After a few songs, including Home Sweet Home, God Save the Queen, &c, sung by the children then marched to the station, where they departed amidst loud cheering.

(The rematch was not played until 1872, the scheduled match for the summer of 1871 was cancelled due to concerns from Tain over an outbreak of smallpox in Inverness.)

On Saturday a return football match for a cup, presented by Mr. T B Snowie, Inverness, was played at Tain between the Inverness Reformatory and Tain Ragged School. What made the match the more interesting on this occasion was, that the cup which in 1870 had been won at Inverness by the lads of the Reformatory, was this year to become the property of the party winning it.

The Invernessians arrived about half-past eleven, accompanied by their superintendent, Mr. Grant, and numbering about eighty, marched through the town preceded by a flute band. Arriving on the links, they were met by the Tain boys under Mr. Smith, and a game was speedily arranged, Mr. McLardy of Tain Academy acting as umpire. The opposing combatants numbered fifteen on each side, and, animated by the recollection of the prize to be won, all joined in the game with spirit. After a tough contest of about three-quarters of an hour’s duration, the Inverness lads succeeded in kicking the ball through the goal. Unfortunately, however, it was discovered that a few had been unable to resist the temptation of surreptitiously joining in the game, as the umpire had under the circumstance to declare it no goal. The cup, therefore, remains to be again contested for.

After the match, the boys marched up to the town and assembled at the Mason’s Hall, where an excellent and abundant dinner was provided for them. Baillie Matheson presided, and grace having been said by Mr. Robert Smith, the edibles were deftly distributed by the fair hands of a few active young ladies, who gave willing and efficient assistance on the occasion.

The part of the proceedings having been terminated not less actively, and with much less noise than the game on the links, the Chairman called for three cheers for the Queen, which was heartily given. He then, in a few words, expressed the pleasure it gave him to preside on the occasion, and as the train and more time and tide would wait for no man, he would say nothing more in handling the cup to Mr. Grant than just to express the great pleasure the people of Tain felt in seeing so many pupils from Inverness come to compete for such a prize with the Tain boys. He understood that the game was a drawn one, and he hoped the cup would be competed for soon again. He hoped all had enjoyed themselves. (Applause)

Mr. Grant, in reply, said he did not know how to express their gratitude for the kindness shown them that day. It was much more than they expected. He had been pleased with the manner in which the match was played. A mistake on their part had occurred, several of the lads slipping in unawares. He was sorry the hitch had taken place, but he hoped, as the cup was going back to Inverness, that it would be played for again. He hoped to see the Tain lads at Inverness, and they would try to see them as comfortable as they had made his lads that day. He would express his gratitude to all, and particularly to Mr. Smith, and hoped he would soon have the pleasure of returning the compliment. (Applause)

Mr. Smith briefly referred to the enjoyableness of the day’s proceedings and mentioned the debt of gratitude both the Tain and Inverness boys were under to Mr. Snowie, for his liberality to them in several ways.

Short addresses were given by Mr. Bain, Mr. R. Smith, and Mr. McLardy, and the usual votes of thanks being given, the Inverness boys sang “Hail Smiling Morn,” and the National Anthem after which they marched to the station, and were speedily on their homeward way.