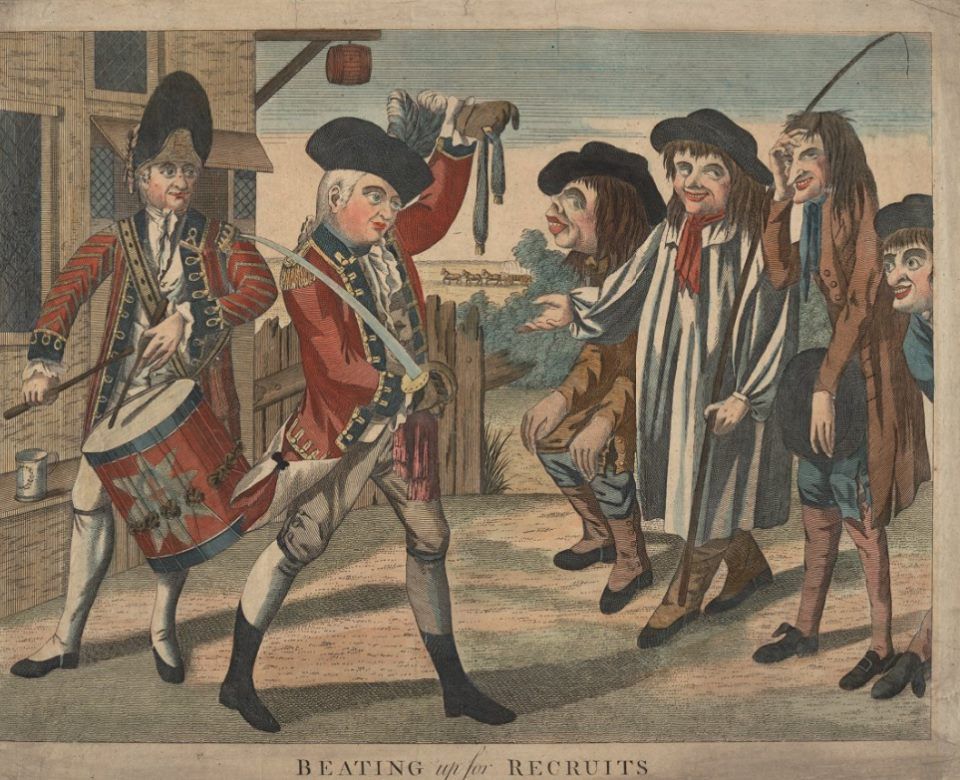 Transcriptions of letters from the Pitcalnie Papers showing that Ross-shire was being targeted by unscrupulous military recruiting parties during the year 1778.

At the beginning of Roderick Innes’ book on his life as an ordinary soldier in the 78th Highlanders, he states that his father was pressed into Lord Seaforth’s Regiment, “beset in the dead of night by a band of armed ruffians, who forced him from my mother's side in bed, and without giving him time to dress himself, bound him hand and foot, and carried him off to join the regiments.” Although, this may seem unlikely several letters from the Pitcalnie Papers transcribed by the late Chief Miss Rosa Ross, leave little doubt that during 1778 Ross-shire was being targeted by unscrupulous recruiting parties.

The first letter is from Alexander Ross to his chief Munro Ross of Pitcalnie, Alex seems to have fallen for the recruiting parties most infamous of ploys, fill them with drink and insist they had taken the money;

The petition of Alexander Ross son of Malcolm Ross tenant at Rarichies humbly shows, that the day Donald Mackay in Amat was buried, which was some day in January last, I, the said Alexander Ross was working in my Masters service at Kincardine, when seven men came, with Mr Baillie’s son who is an officer, and took hold of me in order to carry me of Prisoner, however, some women came and rescued me out of their hands, and we were all in a mobe*, without Doers*, when the people that was with the Internment saw the mobe*, so they came and rescued me out of their hands, then we went to the house where there was some drinking, and 10 Guinee’s put upon the table.

At last John Crombie came and inquired in the matter, and asked me if I would take the money that was on the table of money in Pitcalnie’s name, this money being a shilling. I took it, which I would rather than all their Gold and then went home to Amat, and continued there working constantly as John Crombie directed and as I am made to understand was attested by Invercharron in Pitcalnie’s name, and since by sure information John Crombie passed his promise at me and Duncan Mackenzie at Amat, and other two if he could Purchase them upon which sure Information I left Amat, and want to know your pleasure.

I shall always be ready to the last drop of my blood to serve Pitcalnie anywhere, I hope you’ll give me deliverance as your wisdom and prudence shall direct, as I’m honest? Here and there I shall do my best to keep out of their hands, till your Pleasure sends an answer which I expect by first post, all this above is the truth, say to the contrary who may it, therefore, be your pleasure to send an answer and I shall ever be your faithful servant

N.B. I shall serve no other officer, but I am always at Pitcalnie’s service.

* The word Doers is another word for Grieve but it could also be doors making it outdoors, it is not clear. Help

* Mobe, need help with this word.

The second transcription, is a short letter, from Lady Naomi Ross to the Reverend George Balfour at Tarbat. In the letter, she writes of her concerns for her tenants in Easter Ross on hearing of the military 'Pressing' occurring in the Tarbat Parish.

It is currently being said here that Pressing not Recruiting goes on in your Parish-neighbourhood. I hope that Geanies will show favour to his neighbours Pitcalnie’s tenants and that you will in this as well as in everything else, be a friend to the absent, this is sad times, may it be the pleasure and will of the almighty to dispense the cloud that hangs over us.