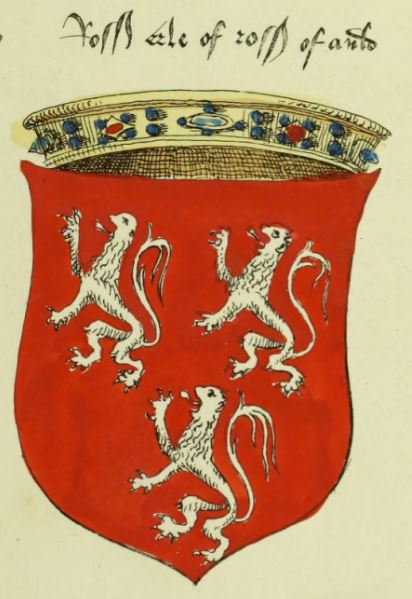 The Wars of Independence spill into Easter Ross.

A year after the defeat of the Scottish army at the Battle of Dunbar in 1296, with the Earl of Ross a prisoner of the English in the Tower of London, large parts of Ross and Murray broke out into an open revolt led by Andrew Murray. This put the Earl of Ross's wife, Euphemia in the most difficult of positions, as can be seen in this letter sent to King Edward I from the constable of Urquhart Castle on July 25th 1297.

“Some evil-disposed people having joined Andrew of Moray at the castle of Avoch in Ross, and Alexander Pilchys, Sir Reginald le Cheyne wrote asking him to meet him at Inverness on the king’s business on Sunday next after Ascension Day. When I was returning to Urquhart after the day’s business, Andrew of Moray and Alexander Pilchys with their abettors wounded and took him prisoner and also […] of Loveth, and 18 horses. On Monday morning Andrew and Alexander besieged the castle, and the Countess of Ross sent an esquire to say this was not her doing, and offering assistance; but advising him to surrender, which he refused to do. The esquire departed, leaving Andrew and his army and the burgesses of Inverness. He then saw the Countess’s army which she had sent under her son to his aid. He met and dismissed an emissary from the besiegers, and received help from the Countess’s son in provisioning the castle. In a night assault William Puer and Richard the constable’s son were killed, and Sir Alan […]. The besiegers drew off and went to the castles of Avoch and Balkeny and the woods there. He greatly praises the Countess for her assistance, and begs the king will release her husband on sufficient security, in which request her son joins.”

There was no early release for the Earl, despite the attempt of the Countess to aid the garrison at Urquhart Castle, although their son Hugh was given permission to visit the imprisoned Earl the following month. Andrew Murray eventually retook the castles at Urquhart and Cromarty and much of the Highlands remained free from Edward's control until his invasion of Scotland in 1303.

The Countess likely had little choice in playing both sides, and it has been suggested that the mysterious Knight ‘Climes’ from Blind Harry’s poem ‘The Wallace’, who led the men of Ross to Wallace’s aid in Nairn and Buchan, could have been Sir John of Ross the Countesses son. There is no evidence of this but he was later granted much of these lands by ‘Robert the Bruce’. “The Knight Climes of Ross and the barons, who were with him, came into the Murray Lands with their good chivalry. The good Knight took the house of Nairn, and slew the Captain and Garrison. From thence they passed into Buchan."

Photo: The 'Wallace Chair' in Balnagown Castle, which is said to have belonged to the great Scottish patriot.