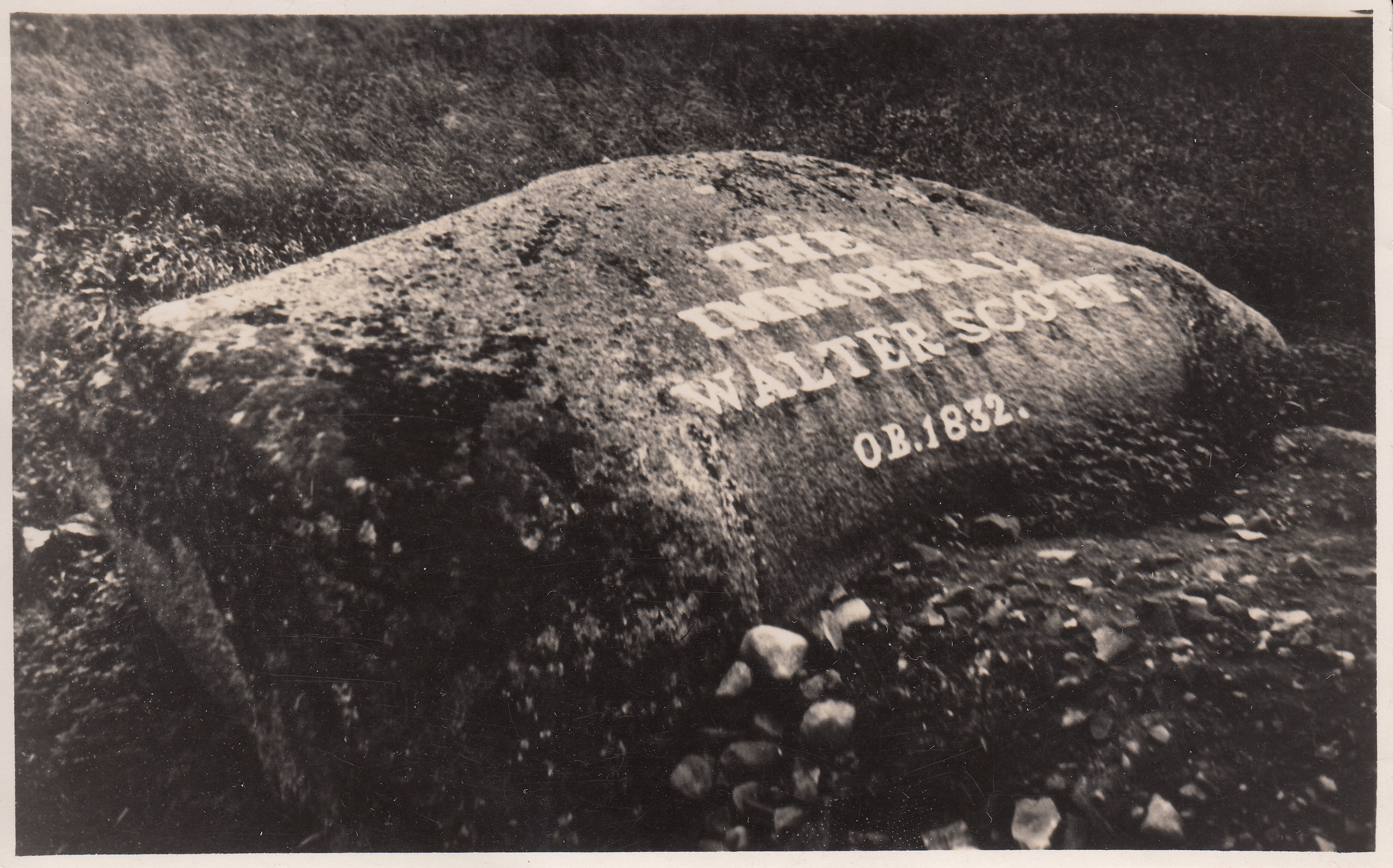 A short article on the history of the Morangie Stone

A large granite boulder lies in a small gully close to, and on the left hand side of, the A9 going north.  It is what geologists call an “erratic” (from the Latin verb meaning to wander) and was transported from elsewhere during the Ice Age and left behind when the ice melted and retreated.  Before it acquired its famous inscription, “The Immortal Walter Scott OB.1832”, it was known as the Big Stone of Morangie or simply the Morangie Stone.  There are many other such boulders scattered throughout the eastern areas of Ross-shire but this one became “the only known memorial” (according to an old Tain Official Guide c. 1930s) to Sir Walter Scott “outside of the cities of Edinburgh and Glasgow”.

There are several versions of how this came about – mythological, fanciful and anecdotal.  First the myth, similar in theme to other myths elsewhere – two giants, one on Struy and the other on Tarbat Ness, were throwing a large stone to each other when one of them got tired and the stone fell half way and landed at Morangie.

A long held version, origin unknown but undoubtedly fanciful, appears in the old Tain Official Guide mentioned above and was perpetuated elsewhere - “When Glenmorangie Distillery was being built in 1843, one of the masons engaged on the work was wont to repair to this stone at the dinner hour to eat his ‘piece’, and at the same time occupy himself in commemorating one to whose memory, no doubt, he was deeply attached.  Bookish stone masons, with Hugh Miller at their head, were once fairly common in the Highlands.”

A third version is based on several anecdotes recorded in a correspondence following a letter in the North Star in 1932.   As all these anecdotes date from many years after the event and thus rely to greater or lesser extent on hearsay or memory, they must be treated with a certain amount of caution.  However, although they vary in detail, they all agree that the inscription on the stone being placed there in the year 1832 (not 1843) and was commissioned by a lady.  One of these references has a particular ring of authority about it, coming from none other than the then current Chief of the Clan Ross, Miss Williamson Ross, who had got it from  Major Rose of Tarlogie about fifty years previous to the date of the North Star correspondence -

“As far as I can remember, he said the lady was passing through Tain when she heard of the death of Sir Walter Scott & being a great admirer of the novelist asked & obtained permission from Major Rose’s father, who owned Tarlogie at that time, to have the inscription cut on the stone.”

Other, relatively reliable sources, identify the lady as a Miss Lindsay who “had published a book on ‘Boulders’ or some such subject” and state that it was carved by a mason working on a bridge nearby.  Given the dates discount the Glenmorangie mason, this seems more plausible.

Whatever the truth, Glenmorangie Distillery adopted the image of the Scott Monument in Edinburgh as their Trade Mark in the 1890s, possibly partly inspired by the inscription on the stone.  Also the distillery eventually bought the stone and a few feet around it from the local farmer.  Changes in ownership of the distillery in more recent times led to the Scott association being abandoned.

However, although the renowned Scottish novelist and poet never visited this area, there are other, some fairly tenuous, connections between the distillery, Tain and the Scott monument – indeed with Sir Walter himself.  The Tain family of architects, Andrew Maitland & Sons, not only produced the designs for the rebuilding of the distillery, but they were also involved as directors.  The founder of the firm, Andrew Senior, whilst in Edinburgh, before coming to Tain, is reputed to have assisted a fellow lodger to set the type for Sir Walter Scott's manuscripts.  It would appear that the fellow lodger was William Laidlaw who was one of Sir Walter Scott's closest friends, his literary personal assistant and his steward at Abbotsford.  After Scott's death in 1832, Laidlaw later became factor to the Balnagown estate near Tain and in in 1842 Maitland was commissioned to do some work at Balnagowan.

Furthermore, the designer of the Scott Monument, Sir John Steel, had apparently many associations with Tain and presented a plaster scale model of the monument to the Old Town Hall Company.   After passing though several hands this model is now part of Tain Museum collection.  The museum also has a signed cheque drawn, 27th October 1829, by Sir Walter Scott on his account with the Selkirk branch of the British Linen Company - a gift to the museum from the Head Office of the Bank of Scotland in recognition of the Tain area’s association with Scott.  The British Linen Bank was the first bank to have an agency in Tain.  It was eventually taken over by the Bank of Scotland.

The Walter Scott Stone used to be regularly touched up with white paint but had been sadly neglected for many years until Tain & Easter Ross Civic Trust did some restoration of the inscription and tidying of up the surroundings a few years ago.