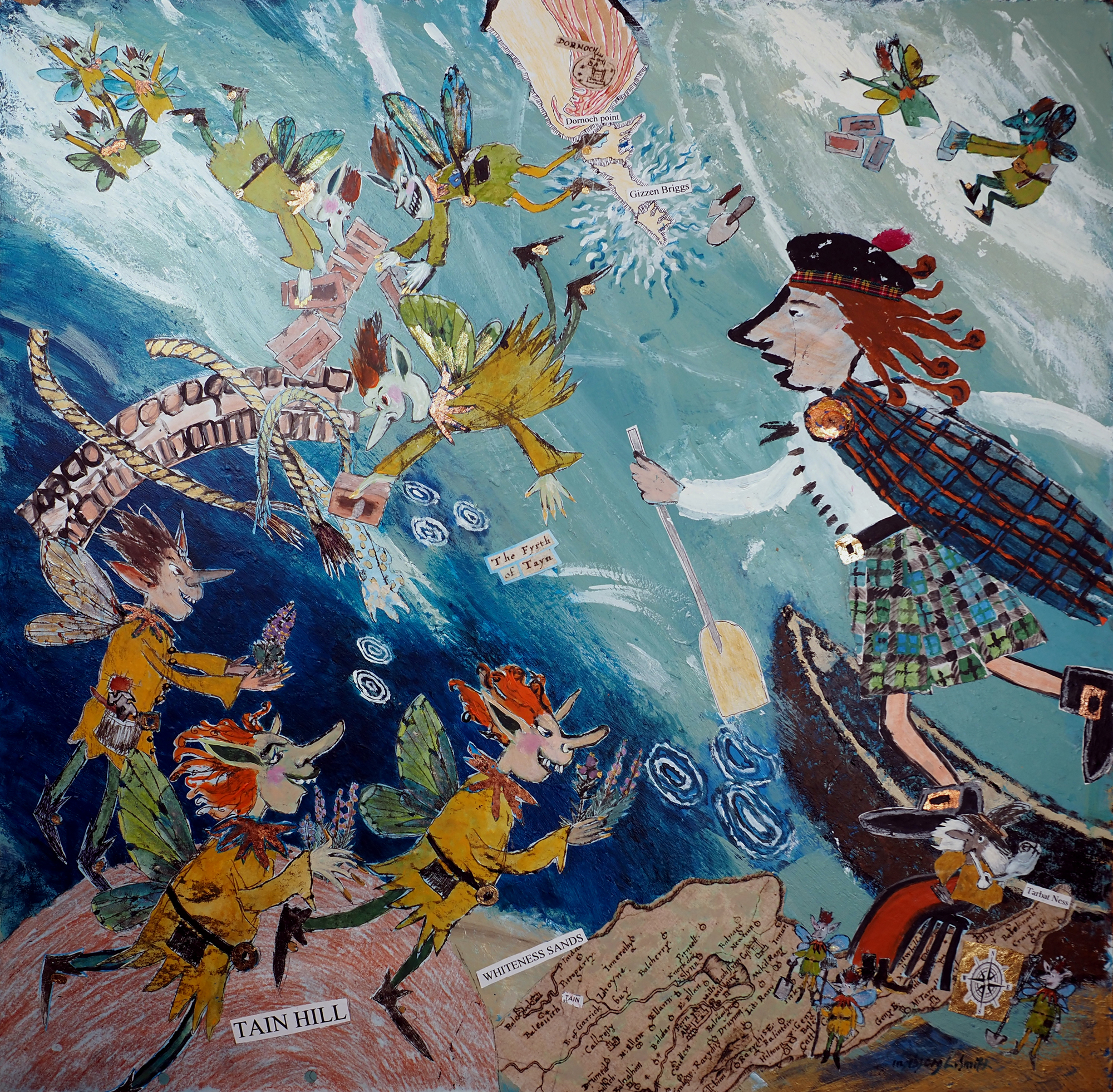 A short story, explaining why fairies are stuck endlessly trying to build a bridge from Tain to Dornoch.

Near tongue, in the far north of Scotland, there lived once upon a time one of the Mackay Chieftans. He was lord of all the Reay Country, which was beautiful then as it is now- with its lofty bens, and its purple moors. Its northern boundary is the seashore, with white sands and a rugged coastline, and here and there a fine sheltered bay. One of these bays, called the Kyle of Tongue, runs very far inland and is like a deep, narrow wedge cut out of the land. Now this wedge used to aggravate the Laird of Reay because whenever he wanted to call on his sweetheart, who lived directly across the Kyle, he had to go all the way up one side and all the way down the other.

He could not cross by boat, because the rocks below were so steep that there was no landing for a boat on either side. “If I could only get a bridge built!” he said – and he called all the fairies in the Reay Country into council, hoping they might help him. “We are not bridge-building fairies!” they said. “But perhaps the Witch of Reay can tell you who will help you.”

So to the Witch of Reay he went.

“No, Laird of Reay,” she said to him. “I cannot help you, but I can tell you who can. Send you a messenger to Skian Beg, the Wise Woman of Tarbat, in Ross-shire. She has working fairies, whom she can command at will.” So the Laird immediately sent Angus Mackay, one of his clansmen, off to Ross-shire. Angus had a long, long way to walk, but he shortened the distance by going to Dornoch Point and then crossing the Firth by boat to Whiteness point below Tain. From there he walked to Tarbat Ness, where, in a dark hut on a rocky headland, he found the old witch. There she sat, day after day, gazing out to sea; and night after night, talking to the stars. The Reay man felt very eerie when she turned her strange eyes on him, and said, “Well, Man of Reay, and what brings you here to trouble me?” When he told her what the Reay Witch had said, she answered coldly, “And will you be telling me, Angus Mackay, why Skian Beg should help the Laird of Reay at all? Indeed, it is myself never liked him or his.”

“But, mother, are you acquaint with the Laird?” said the astonished man.

“That I am – and with his forbearers as far back as ‘Angus the Absolute’- who was a proud man and a leader of men; but he was hard-hard!” Then, with her voice softening, she said, “Ah, but his lady was kind. She never turned a haughty eye on Skian Beg! So for her sake I will give you help you ask for the Laird of Reay. Now, wait you here for me, and in a box which you must carry back to him I will give what the Laird needs. When he gets that he will be able to bridge the Kyle of Tongue.”

She went away, and soon returned – carrying a large box, which was covered with long grasses. As she handed it to Angus she said: “Now, Man of Reay, carry this back to the Laird, and remember this! If you try and look inside this box you will rue the day you were born.” Angus thanked her, and walked off with the box under his arm. It was not heavy, but he felt something strange about it! Indeed, it at times he felt sure there was something moving inside it, and he wished very much to know what it could be. As he got further away from Skian Beg the fear which she had put upon him grew less intense; and by the time he reached Whiteness Point he felt quite daring.

“Why need I be minding yon ould witch?” he said to himself. “For sure there is something moving in this box, and I’ll take a peep.” So he broke the grass fastenings very cautiously, made a hole in the heather, and then with his dirk he poked a hole in the box. Well! Angus got the fright of his life, for from the box sprang hundreds of little fairies! They clambered all over Angus, they poked at his eyes and ears, and they pulled his hair – screaming all the time, “Give us work, master! Give us work, give us work! We are working fairies!”

“Oh pity me!” said the inquisitive Angus to himself. “What am I to do now at all, at all?” He gave a desperate look towards the land. There above the beach was Tain, and beyond that again was Tain Hill, so he said, “Go you and strip all the heather off Tain Hill. Quick now! Be going!”

There was a whirr of wings, and in a moment they were gone. “Isn’t that a mercy!” said Angus Mackay to himself. “Now I will be going! And I will take the box and tie it up again and carry it to the Laird. He will never be any the wiser.”

He did this, and then hurried back to the boat, which was lying high and dry on Whiteness Sands – for the tide had gone back while Angus was away. He pushed it out as quickly as he could, and he had just managed to reach to water when suddenly the air was darkened with returning fairies.

“Och, och!” said Angus to himself, “and what will I be doing now?” Again they clambered up on him, screaming, “Give us work, master! Give us work!”

“And is it work you are asking?” he said to them angrily, “when I told you to strip Tain Hill. Indeed! And you hardly away when you are back!”

“Tain Hill is bare,” they cried. “Look up. There is not a blade of heather on it.” And sure enough, when he looked, the hill which had been glowing purple was now brown earth! And they screamed at him, “Give us work, master! Give us work!”

Angus now looked at the water of the Firth, and – “See you” he said, “You must build a bridge that will stretch from here across to Dornoch Point. Make bricks of sand and then spin the sand into ropes which will bind the bricks together – and go on building until you can walk right across the Firth without wetting your feet. Now be off with you!”

Again the fairies wings whirred, and the moment the fairies had gone Angus made for the boat, and – the tide being favourable – he soon reached Dornoch Point, and left the fairies far behind.

The fairies got on finely with their work until the tide came up, and then alas! – The incoming water destroyed all their bricks and ropes of sand that they had spun. “Oh dear! Oh dear!” the poor things cried. “All our work is wasted!” So they just had to begin all over again, but they felt it was unfair, and some of them cried bitterly in their disappointment. Every day and every night the same thing happens, for you know the tide ebbs and flow twice a day; and all the time the poor fairies struggled away to build the bridge. That happened hundreds of years ago, and do you know, they are working there still! From the point below Tain a line of breakers- which Tain people call “The Gizzen Briggs” – stretches across to Dornoch. They mark the line where the fairies are working. When the tide is low and the water is calm there is only a ripple along the line, and you know the fairies are laughing and singing among themselves because they think they are going to finish their bridge someday. But when the stormy weather comes the Tain people hear a moaning sound and they say, “Listen to the Gizzen Brigs. How loud they are tonight!” They don’t know- although you and I do – that it isn’t the gizzen Brigs at all. It is the sound of the fairies crying because their work is never done!